About Armenia! Armenia is located in South Caucasus, between Europe and Asia. From the west Armenia is bordered by Turkey, Georgia from the north, Azerbaijan and Artsakh (Nagorno Karabakh Republic) from the east and Iran from the south. Even though the borders of Turkey and Azerbaijan are closed, Armenia is easily accessible from Iran and Georgia. The border procedures are not heavy in Armenia making the process of entering the country, easy and quick.  The country area is 29,743 square kilometers (11,484 sq mi), of which 90% are located at an altitude of 1000 m above sea level. The highest point is Mount Aragats (4090 m / 13418 feet), and the lowest – Canyon of the River Debet (400 m/ 1312 feet).

The official language is Armenian. It is considered a separate branch of the Indo-European family of languages. The Armenian alphabet was created by Mesrop Mashtots in 405 and consists of 39 letters.

At this time, the Armenian language is divided into two branches: Eastern and Western. Eastern Armenian is spoken by Armenians living in Armenia, Nagorno-Karabakh, Georgia, and Iran. Western is the language of the diaspora living mainly in Europe and the United States. 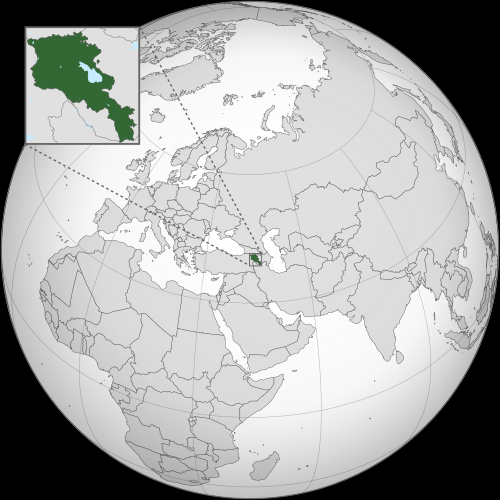 The Armenian Kingdom was the first state on planet to adopt Christianity as its official state religion in 301 by the King Trdat III. At this time 98.7% of the population are Christians. 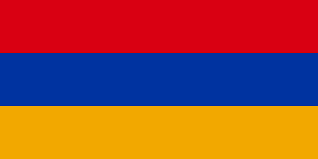 Armenia is one of the safest countries in the world for solo travelers as well as for families. Low crime level and the hospitality of the locals allow tourists to enjoy their time here without any fear for their safety.

Yerevan is the pink “pearl” of Armenia, the capital of this small but ancient country as old as Babylon and Rome. This ancient European city is mostly built by different shades of the local pink stone called tuff. You should see the Republic Square where the combination of different shades of pink stone is more vivid. 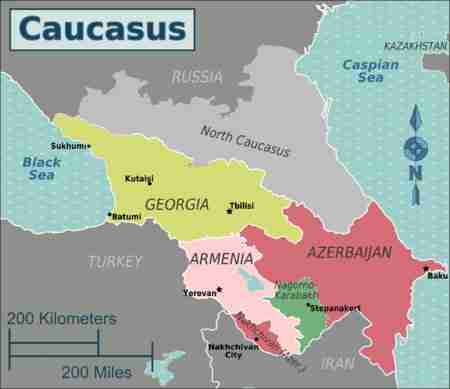 Yerevan is one of the most ancient cities in the world founded in 782 B.C. It’s 29 years older than Rome, the capital of Italy. The founder of Yerevan was the Urartian King Argishti I who founded the fortress of Erebuni on the southern part of nowadays Yerevan “to the glory of the country of Biaina and to the fear of its enemies”. “Biana” is the local name of Urartu or Ararat kingdom founded on the shores of Lake Van (now in Turkey). Until now one can see the citadel of Erebuni fortress located on a hill. On the territory of the fortress one can see the ruins of two temples of worship, one with frescoes. 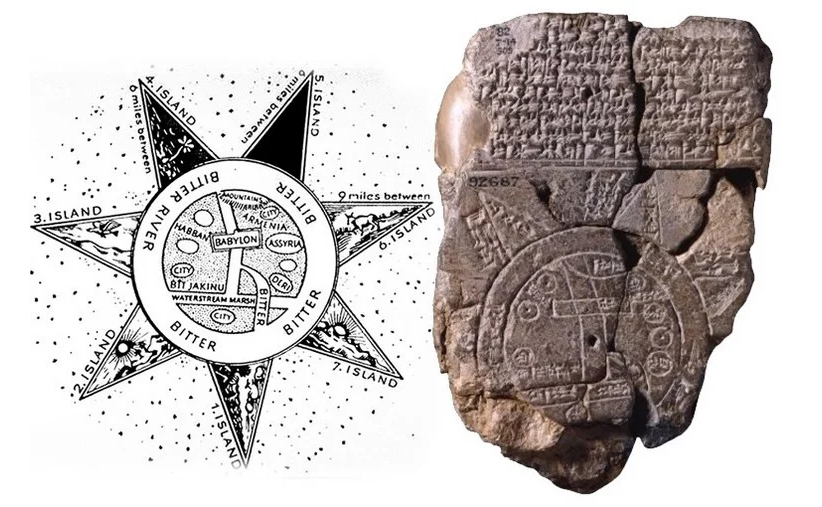 The heart of Yerevan is the Republic Square, a large oval-shaped square framed by the buildings of some ministries, the Government of RA and the History Museum of Armenia which houses more than 300.000 artifacts including the oldest leather shoe in the world which is about 5500 years old.

Each building on the Republic Square has its unique architectural solution. They have beautiful vaults and their facades have various ornaments typical to the Armenian national architecture such as pomegranates, pomegranate branches, grapes, vine leaves, peacocks, eagles, etc. The same ornaments can be found on the walls of medieval Armenian churches and monasteries. 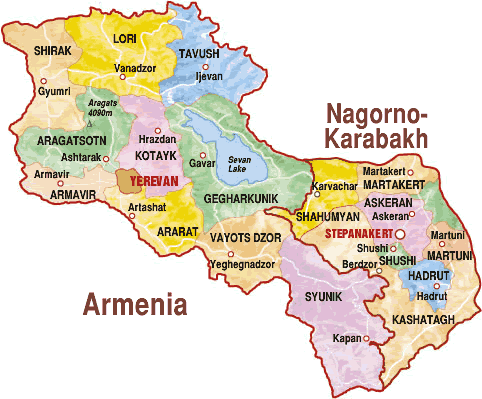 Due to the location in the subtropical zone, the climate of Armenia is continental. High altitude above sea level, as well as highly dissected terrain, explains the difference of weather in different regions of Armenia. Precipitation is distributed unevenly, depending on the altitude and on the season. Most of the precipitation comes in spring. In winter in the mountainous areas and ski resorts there are lots of snow, which stays on the slopes until mid-spring.

The summer is hot and dry. It begins in June and lasts till mid-September. In the capital and in the territory of Ararat Valley the daytime temperature reaches + 25/ 35 °C. The maximum temperature in summer is +42 °C. In the regions, the weather is rather mild; the difference between the regions and Yerevan is usually 7-10 degrees.

The autumn, especially its beginning, is considered the most pleasant time for visiting Armenia. The weather is mild, warm and sunny. The nature pleases with bright colors and lots of fruits and vegetables. The temperature varies from + 20 to + 30 °C

The winter in the capital is short and sometimes snowy. The temperature ranges from +2 to -10 °C. In mountain regions and ski resorts, it is always colder than in Yerevan and in the mid-December there is much snow which stays till the end of February.

The spring here is short. It begins in mid-Mart and lasts till mid-May. The temperature ranges from +12 to + 25 °C. In the regions, it is always a few degrees cooler than in the capital. 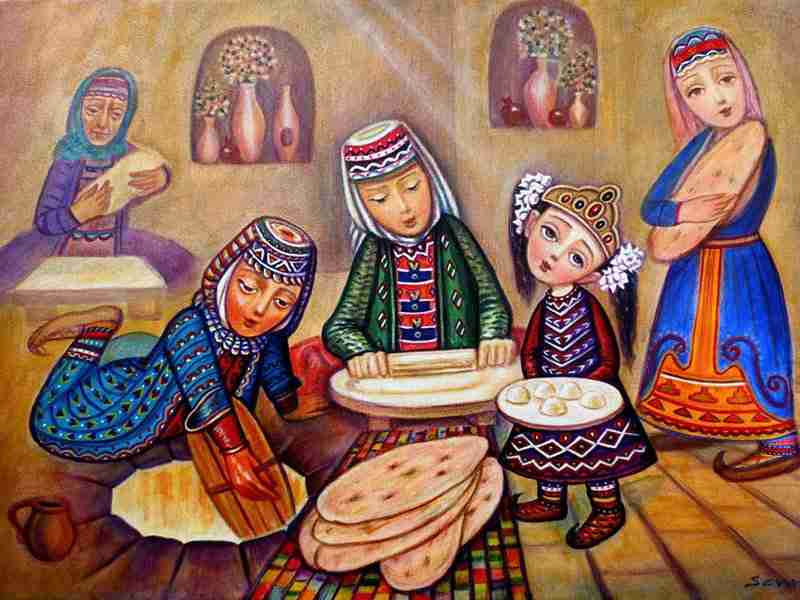 Armenian cuisine is one of the most ancient on Earth and its preparation techniques today remain almost the same as 1500 years ago.
Armenian cuisine includes the foods and cooking techniques of the Armenian people and the Armenian diaspora. The cuisine reflects the history and geography where Armenians have lived as well as incorporating outside influences. The cuisine also reflects the traditional crops and animals raised in areas populated by Armenians.

Regional influences include the Mediterranean, the Caucasus, the Middle East, Eastern Europe, and to a certain extent also influences from the Balkans. Armenian cuisine and traditions in turn have influenced the culinary traditions of nearby countries and cities such as Aleppo. The preparation of meat, fish, and vegetable dishes in an Armenian kitchen requires stuffing, frothing, and pureeing. Lamb, eggplant, yoghurt, and bread (lavash) are basic features of Armenian cuisine. Armenians use cracked wheat (burghul).

The traditional style cuisine is rich with dishes made of fruits, meat of wild animals and different kinds of fish.
Armenian foods include small appetizers, grain and herb salads, grilled meats, a large variety of soups, stews and flat breads. Bread is a favorite in Armenian cuisine and usually found at the table at every meal.
In fact it is hard to imagine Armenian cuisine without the traditional lavash bread (unleavened wheat cake), which is loved the world over. Wild rice and rice pilaf are also common in Armenia, as is skewered meat, commonly known as shish kebab, which is fast becoming as popular as hamburgers.
Armenians are also famous for their soups, which are essential everyday meals for families. The most popular is khash, a clear broth made from ham hocks and herbs. Tradition holds that khash can only be cooked by men and eaten in the early morning in the dead of winter when it is served with fresh garlic and dried lavash. Another well-known dish is gharsi khorovats – slivers of grilled meat rolled up in lavash, similar to the Turkish doner kebab. In fact Armenian cookery uses about 300 kinds of wild-growing herbs, commonly used as seasonings or even a simple dish.
However, you won’t find many cookbooks on Armenian cuisine as most recipes are handed down from parent to child. These recipes are forever changing with the ingredients available.
Actually there are hundreds and hundreds of recipes in Armenian cuisine, after all, Armenians can be considered among the biggest gourmets in the world.
Nowadays they are trying to preserve these traditions – passed down as part of their heritage.

Fauna in Armenia is diverse given the country’s relatively small geographic size, owing to the varied habitats created by the area’s mountainous terrain.

Armenia is an important area for migratory animals. About 350 different bird species were recorded in the country. Many of the world’s domesticated animals originated in the area Armenia is located in, and the mouflon, the ancestor of domesticated sheep, is present there. Research suggests that about a quarter of the animal species in Armenia are internationally endangered. The mouflon are suffering a great population decline due to poaching and habitat loss, and the Sevan trout, which made up thirty percent of the fish in Lake Sevan, have virtually disappeared.

Southern and south-western Armenia remains the last stronghold for survival of leopard in the whole Caucasus, in part due to its connectivity with Iran where the main portion of the Persian leopard population exists. The total population size in Armenia numbers no more than 10-20 individuals, including adults, sub adults and cubs. Special calculations were not carried out. By fragmentary data, population in Armenia is accounted not more than 25 individuals.

For the biologist, Armenia is heaven for exploration. It is rich with fauna and flora, but what is amazing is the biological diversity of wild life. It varies from dry semi-desert species of flowers and insects to typical temperate forest inhabitants like bears and wolfs. Special attention should be given to flora, insects, birds and reptiles of Armenia. Some of them are endemic to Armenia. One of the most interesting is original Ancient Wheat of Erebuni, the ancestors of current wheat.

With 17 vegetation zones, the variety of plant-life in Armenia is truly astounding. The country has everything from desert plants to oak, beech and pine forests, wet marshland and sub-tropic plants to alpine meadows teeming with wild flowers.

There are even virgin fields of wild grain, the forebears of the first wheat in the ancient world, believed to have been cultivated in Armenia 12-15,000 years ago.  Known by their genus names Triticum Urartu and  Triticum Araraticum,  the wheat is native to the Ararat valley and can be found in small protected fields between Yerevan and Garni.

Armenia’s flora is so diverse and rich it seems all you would have to do is add cacti, palms and a rain forest, and you would pretty much complete the world’s diversity of plant life.

Armenia has over 3,500 species of plants, more than half of the 6,000 that can be found in the entire Trans-Caucasus region.  While Europe has around 20,000 species, and the entire North American continent holds 40,000 species, with a total landmass of just under 30,000 sq. kilometers (about the size of Belgium), Armenia’s diversity and close proximity of so many different types of flora is often breath-taking.

Literally within an hour’s drive of Yerevan, 5 completely unique topographies lie, each with its own varieties of flora, many lying on opposite sides of the highway.  While one side will hold forests teeming with woodland species, the other may be semi-desert, Mediterranean marshland, mountain steppe or alpine meadow.  Forests are home to particular species unique to the Trans-Caucasus, including the Arax Oak, Eastern Beech, Caucasian Pine, and a coniferous tree called the ‘Tis’.

Native to Armenia are the apricot and peach. The apricot was taken by Alexander the Great’s army back to Greece, where the Romans then spread it throughout Southern Europe.  Other fruits that grow in the country include apples, pears, cherries, mazzards, plums, pomegranates and an amazing variety of grapes.  The Ararat Valley sustained a large cotton industry before vineyards were promoted, with further diversification in vegetables and melons.