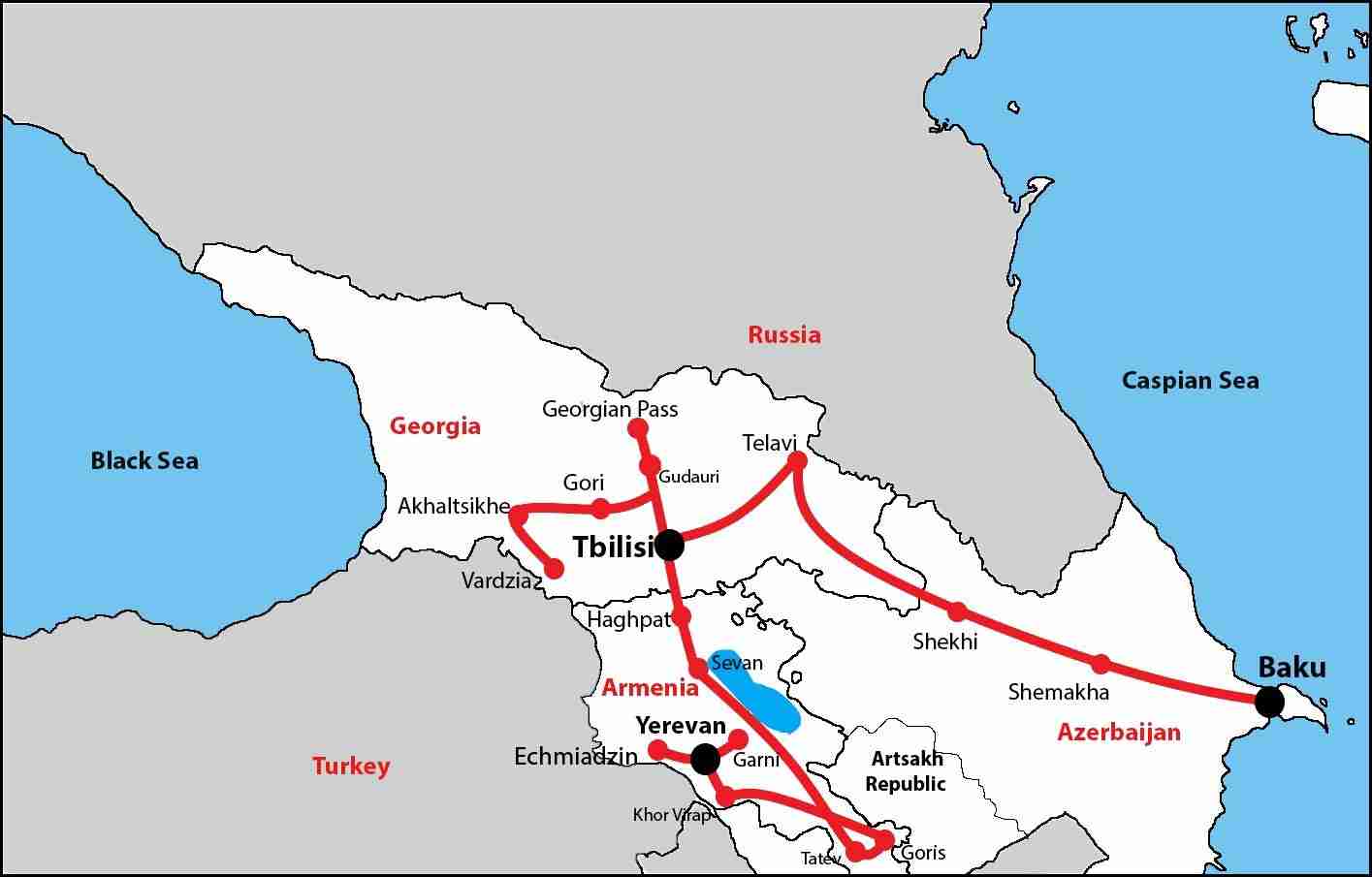 Welcome to Baku! Meet & greet at the airport. Transfer to your hotel.

After breakfast we explore the oldest district of the city – “Old Baku” or “Icheri Shey-Har” (UNESCO World Heritage Site) with its maze of narrow, cobblestone streets lined with small mosques nestled between terraced cafes and grand turn-of-the-century architecture. Dozens of historical-architectural monuments are found here such as the Palace Shirvan Shahs, the Maiden Tower which is the symbol of Baku city, the Caravanserai – the merchants’ rest-stop. Old Baku is inhabited by 1300 families. It’s an ancient city inside the modern city of Baku.

Drive to the Absheron Peninsula which was the site of some of the world’s first petroleum production in the 19th century and shows the ravages of its oil-rich history. We will visit Gobustan (UNESCO), a culturally significant landscape of myriad rock carvings with over 6,000 Stone and Iron Age petroglyphs which depict people, animals, battle-pieces, ritual dances, bullfights, boats with armed oarsmen, warriors with lances in their hands, camel caravans, pictures of sun and stars, on the average dating back to 5,000-20,000 years.

Later we visit the temple of fire worshippers called “Ateshgah”. Thousands of years ago the ancient supporters of Zoroaster religion worshipped the fire here. We continue to “The Burning Mountain” called Yanar Dag. Here you can witness an amazing natural phenomenon – the incessant natural gas burning process. Back to Baku.

Today we head northwest along one of the most scenic routes in Azerbaijan. We will pass through stark, arid landscapes dotted with mud volcanoes, before arriving in Maraza where just off the main road lies Pir Diri Baba Mausoleum built precariously into the side of a cliff. Stop in Shemakha, once the capital of the Shirvan Empire. We visit the Grand Mosque, built on the foundations of the first mosque built in the Caucasus in the 10th century. Afterwards we drive up into the mountains to explore the town of coppersmiths – Lahij, whose small population still speak their own language.Overnight in Sheki, a lovely town which used to be on the Great Silk Road (B-/L-/D-)

Early in the morning we visit Kish Church, a beautiful early medieval Caucasian Albanian church, located just outside of Sheki. Return to Sheki and check out a workshop where “shebeke” stained glass windows made with no glue or nails – are produced by masters.

The main attraction of this charming town is the exquisite Khan’s Palace, inside the fortress walls and adorned with detailed mosaics and “shebeke” windows.

Day 6: From Sheki to Telavi (Georgia)

Caucasus range to reach Kakheti, a famous ancient wine making area. Georgia is considered one of the ancient winemaking centers. Lunch at a local winery in the Kakheti region. Continue to Gremi and its impressive citadel complex consisting of a 16th century domed church, tower and king’s chamber. We will also visit Alaverdi Cathedral. Built in the 11th century it is the 2nd tallest religious building in Georgia (155 ft or 55 m). We also visit the largest center of education in medieval Georgia – Ikalto Academy, beautifully located in a grove of cypress trees

Today we will visit the fortified town of Sighnaghi, which is famous for its wine and carpet making culture. Enjoy breathtaking views of the Kizikhi area and the unique charm of Sighnaghi Royal Town. Have a walk in the narrow streets of the town shadowed by the wooden balconies, which are richly decorated with the lace of carved ornaments.Overnight in Tbilisi (B-/L-/D-)

A day dedicated to the exploration of Tbilisi, the capital of Georgia. Tbilisi today is one of the most modern and cosmopolitan cities in the Caucasus. It was founded in the 6th century. Since that time the city has been destroyed and rebuilt on nearly 30 different occasions following a long history of fighting off Persian, Arab, Turkmen, Mongol, Turk and, finally, Russian invaders. We begin our tour with a visit to Old Tbilisi town with its “Sulfur Baths” district, Georgian Orthodox and Armenian Apostolic churches, and a Jewish synagogue and a Turkish mosque side by side, reflecting Tbilisi’s acceptance and tolerance of different religions. We can also see a recent monument – Sameba Cathedral, the largest Christian Orthodox cathedral in the Caucasus. Besides we’ll visit other sites such as Metekhi Church erected on a huge cliff, overlooking the Mtkvari River. Visit the State Museum of Georgia.

Today we will drive north along the Georgian Military Highway, linking Georgia with Russia into the mountainous provinces of the Greater Caucasus. The first stop of our tour will be in sacred Mtskheta (UNESCO World Heritage Site), the ancient capital of eastern Georgia. Georgia conversion to Christianity took place in Mtskheta in 337 AD. We will visit Church of Jvari perched on a cliff overlooking the city, the Sveti-Tskhoveli Cathedral, the first Christian church to be built in Georgia. Continuing our journey into the mountains, we will stop in Ananuri to see the incredible 16th century fortress complex built by the warring dukes of Aragvi in an attempt to control the main road. This evening overnight in Gudauri, a popular winter mountain resort-town.

Continuing our journey up and north through alpine meadows and mountain passes littered with medieval watchtowers, we will reach Dariali Gorge, a 9 mile (14 km) gash in the Earth. We will marvel at the snow-capped Mount Kazbek (the highest mountain in Georgia), an extinct volcano that surrounds us and reaches to just over 16,500 feet (5047m). We drive to the base of the hill and then walk across the meadow leading to the Tsminda Sameba Monastery – a 14th century church built on a mountain peak at 7,200 feet (2200m). After Tbilisi, it is the most popular sight in Georgia.

Dinner and overnight in Gudauri (B-/L-/D-)

We journey down from the mountains stopping in Gori, founded by one of the greatest kings of Georgia, David the Builder in the 12th century.  Visit the house museum of Joseph Stalin in Gori as this town is his birthplace. Continue our trip through the Borjomi Gorge and make a stop in the Borjomi Forest for our walk to the Chitakhevi St. George (Green) Monastery, built between the 9th and 10th centuries.

Today venture further into the southwestern region of Samtshke-Javakheti, named after two of the original Georgian tribes, the Meskh and Javakhs and often seen as the cradle of Georgian culture. The road to Vardzia leads past arid and stone-terraced landscapes including the famed 10th century Khertvisi Castle, one of the oldest fortresses in Georgia. Vardzia history is inextricably linked to Queen Tamar, Georgia’s most famous and loved royal who reigned during the 12th century. It became the most important monastery and primary center of culture in Georgia.

Today we return to Tbilisi, stopping en route to visit the Phoka St. Nino Nunnery. Established on July 23, 1992 by the Catholicos-Patriarch of all Georgia, Ilia II, the convent is situated in an Alpine zone 6,890 feet (2,100m) above the sea. As the legend goes, this very place was Saint Nino’s entrance point to Georgia and she then followed the river Paravani to the city of Mtskheta. A beautiful basilica dedicated to St. Nino was built here in the 10th century and was later restored by the monastery in 2005.

Drive to Armenia, our first stop is Haghpat monastery (UNESCO) dating back to the 10th century. It’s a perfect example of medieval Armenian architecture. Continue to Dilijan, known as “Armenia’s Little Switzerland”. Visit Haghartsin, a fairy-tale medieval monastery nestled in the middle of the forest.

Visit the 9th century Sevanavank Monastery on the peninsula hill located at Lake Sevan. It is one of the world’s largest highest freshwater lakes at 6233 ft. Driving through Vardenyats Mountain Pass famous for its fascinating colorful mountains we reach the Orbelian Caravanserai along the Great Silk Road. Riding the world’s longest aerial tramway (3.5 mi) you’ll reach the miraculous Tatev Monastery, the most formidable monastic complex in Armenia founded in the 9th century.

Our first stop is Karahunj known as the “Armenian Stonehenge”, the oldest observatory in the world which is 7500 years old, truly an enigmatic site. Our next stop is Noravank Monastery, an architectural gemstone nestled among brick-red cliffs, just above a deep gorge. Later we’ll drive to Areni village, the cradle of viticulture. This is where the world’s oldest winery (6100 years old) has been found in Areni-1 Cave Complex. Winery tour and wine tasting. Drive to the 4th century iconic Khor Virap Monastery at the closest point to biblical Mount Ararat (5165m or about 17,000 ft).

Today we explore the secrets and hidden gems of Yerevan, the rose-colored “pearl” of Armenia, a beautiful European city mostly built with different shades of local pink stone called “tuf” quarried in Armenia. Founded in 782 B.C. Yerevan is reputedly one of the oldest cities in the world to have been continuously inhabited. A cultural showcase not to be missed is Matenadaran, one of the world’s largest and oldest repositories of Armenian, Greek, Persian manuscripts. Marvel at the illuminated pages of some of those manuscripts within their glass cases.

Tour of “Goom” food bazaar, a real museum of food! Lunch in the best traditional Armenian restaurant. Thereafter you visit Yerevan Brandy Company built in 1877. The degustation will include their best cognac and one kind of the oldest wines from 1944.

Today we embark on our journey to the lands of ancient treasures of Christian history…Vatican City of Armenia, the spiritual center of Armenia and the seat of the Armenian Patriarch. Explore the UNESCO heritage sites; the Mother Cathedral of Holy Etchmiadzin (303 AD), the oldest official church in the world; the 7th c. Church of St. Hripsime and Zvartnots ruins. Lunch with a cooking class with our charming host in a small village.

We drive to Garni Fortress, the royal summer residence of the Armenian Kings and visit Garni Temple of the Sun, the only standing Hellenistic temple in the Caucasus and the former USSR. We continue to Geghard Monastery (UNESCO), the most beautiful rock-cut medieval monastery in the world with its fascinating natural setting and decorative art carved inside the solid rock. Traditional Armenian bread “lavash” making near the monastery and lunch in a local house. Tour the Garni Gorge to see the most surreal site in Armenia – “Symphony of Stones”.