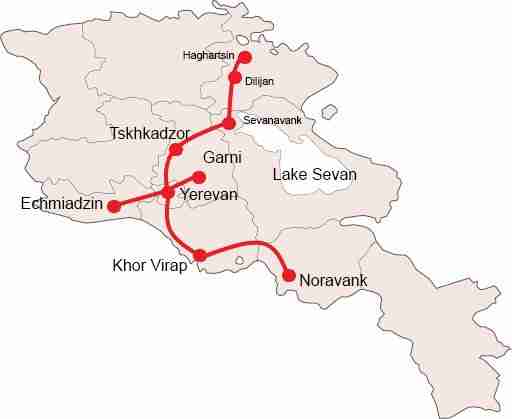 Airport pick-up and transfer to the hotel

Today you explore the secrets and hidden gems of Yerevan, the pink “pearl” of Armenia, a beautiful European city mostly built with different shades of local pink stone called “tuf” quarried in Armenia. Founded in 782 B.C. Yerevan is reputedly one of the oldest cities in the world to have been continuously inhabited.

We start the exploration with the “Victory Park” and “Mother Armenia” monument offering a “bird’s-eye” view of the city with the fantastic view of the majestic snow-capped Mount Ararat (5165 m) dominating the skyline. Continue to the colossal monument of Cascade and Cafesjian Center for the Arts which includes a world-class sculpture garden and indoor modern art museum with works from Botero, Chihuly, Arshile Gortky, Jennifer Bartlett, Lynn Chadwick, Barry Flanegan and Jaume Plensa and many others.

Exploring the Republic Square, Abovyan Street, one of the oldest streets in Yerevan which used to be a part of the Great Silk Road, we walk down the Northern Avenue and arrive at the Freedom Square, the home of the Opera and Ballet Theatre (architect A. Tamanian). The design and layout of the building was awarded with Grand Prix in 1936 World Exhibition in Paris.

A cultural showcase not to be missed is Matenadaran, one of the world’s largest and oldest repositories of Armenian, Greek, Persian manuscripts. Marvel at the illuminated pages of some of those manuscripts within their glass cases.

Today is a long but fascinating day! It is dedicated to exploration of Southern Armenia combining the magic of Armenia’s finest medieval architecture with stunning landscapes.  Our first stop is at Khor Virap Monastery, one of the most popular destinations in Armenia for a number of reasons, primarily because it is where St. Gregory the Illuminator was imprisoned for 13 years before curing King Trdat III of a disease. This caused the conversion of the king and Armenia into the first officially Christian nation in the world in the year 301. Its location, near the closest point to biblical Mount Ararat within Armenian borders, offers a spectacular view of the mountain, the national symbol of Armenia.

We continue to the south driving through the agricultural heartland of Armenia, Ararat Plain offering fantastic scenery of fruit orchards, endless vineyards at the foothills of Ararat Mountain. As soon as we pass the Ararat Valley we can experience the untamed beauty of Southern Armenia – surreal red rocks providing an eerie echo, honey-colored villages sandwiched between them.

Our next stop is the Monastery of Noravank, an architectural gemstone nestled among brick-red cliffs, just above a deep gorge. It’s only here where you can see a bas-relief with the representation of Father God with almond-shaped eyes which look far ahead.

*Lunch in a local restaurant with stunning views, where you will taste the cuisine of Vayots Dzor region – local cheese and yogurt, salads prepared with organic and fresh herbs and vegetables growing in Armenia, and chicken barbecue from “tonir” oven is our main dish today followed by a local pastry “gata” as a dessert with tea/coffee.

Visit Areni, the village of winemakers. We will tour of the world-class archaeological site, the cave complex Areni-1 to see the oldest winery in the world (6100 years old)!

We drive to the best local winery to taste their blow-your-socks off Areni (a deep, full-bodied red) wines made according to traditional wine making techniques used in Armenia thousands of years ago, including the fermentation in terracotta vessels, called karas in Armenian.

Today we embark on our journey to the lands of ancient treasures of Christian history…Vatican City of Armenia, Holy Echmiadzin with its world’s earliest Christian churches included in the list of UNESCO World Heritage Sites. Visit Echmiadzin Mother Cathedral originally built by Saint Gregory the Illuminator in 301-303A.D., when Armenia became the first officially Christian state in the world. Continue to St. Hripsime Church built in 7th century, a masterpiece of early medieval Armenian architecture.

Also visit the Ruins of Zvartnots Cathedral, a majestic cathedral dedicated to St. Gregory. The remnants of Zvartnots, even in ruins, are a majestic sight…Back to Yerevan to visit the Armenian Genocide Memorial and Museum. Free time at the Vernissage market, the largest outdoor arts & crafts bazaar in the Caucasus.

We visit Lake Sevan, the world’s second largest high-altitude lake at 1900m above sea level. It’s a huge mountain lake which takes up 5% of Armenia’s surface area. Marvel at stunning turquoise waters of the Lake Sevan and dramatic mountain scenery after climbing up the peninsula hill where we visit the 9th century Sevanavank Monastery (optional, over 240 steps to get there).

*Lunch in Sevan during which you we taste fish barbecue from the lake.

Continue to Dilijan spa town in Dilijan National Park, a protected area renowned for its serene lakes, picturesque hill trails and peaceful villages. Words alone can’t describe the natural beauty of Dilijan. Many poets used to say, “If there are woods, mountains, streams and mineral waters in paradise, it must be like Dilijan”. Due to its forested mountains and mild climate, Dilijan is named “Armenia’s Little Switzerland”. Take a stroll in Old Dilijan Complex on historic Sharambeyan street.

Then we continue our journey to Haghartsin, a fairy-tale medieval monastery nestled in the middle of the forest.

We also visit the town of Tsaghkadzor, the biggest ski resort of Armenia with forests. In the summertime, people go there to get away from the city life of Yerevan, and the heat, for the fresh air in the mountains. In the winter, the town is completely overtaken by skiers and people who just want to relax and enjoy the snow and scenery. The modern rope-way will take you to the top of Teghenis Mountain, where the greens of land and the blue of the sky get in fusion. Back to Yerevan.

We drive to Garni Fortress, the royal summer residence of the Armenian kings and visit Garni Temple of the Sun, the only standing Hellenistic temple in the Caucasus and the former USSR. It resembles Parthenon in Greece but its dimensions are smaller as it was built only for the Armenian royal family to worship the Sun God.

We continue to Geghard Monastery (UNESCO), the most beautiful rock-cut medieval monastery in the world with its fascinating natural setting and decorative art carved inside the solid rock.  It is the only place in Armenia where you can see a large number of the Armenian exquisite lace-type cross-stones carved on the rocks.

Master class of traditional Armenian bread “lavash” being baked in tonir (underground oven). The preparation, meaning and appearance of traditional bread as an expression of culture in Armenia has been inscribed on UNESCO’s Representative List of Intangible Cultural Heritage on Humanity. After a hearty lunch we will explore the most surreal site in Armenia, the stunning Garni Gorge where you can marvel at basalt rock formations – columns looking like honeycombs or pencils. The site stretches for a kilometer along the river…