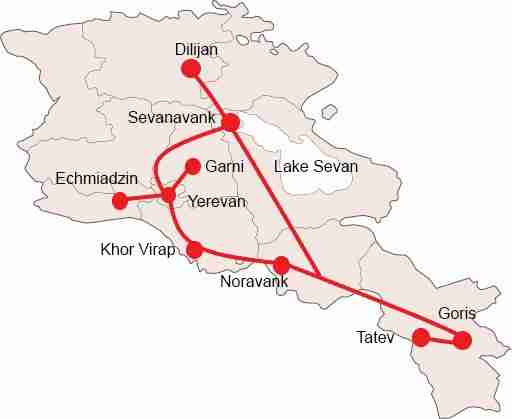 Welcome to Armenia! We will organize a private transfer (from Zvartnots Airport) to take you to your hotel in Yerevan. Rest at the hotel and be ready to start your exciting tour tomorrow.

Today you reveal the secrets and hidden gems of Yerevan, the pink “pearl” of Armenia, a beautiful European city mostly built with different shades of local pink stone called “tuf” quarried in Armenia. Founded in 782 B.C. Yerevan is reputedly one of the oldest cities in the world to have been continuously inhabited.

We start the exploration with the “Victory Park” and “Mother Armenia” monument offering a “bird’s-eye” view of the city with the fantastic view of the majestic snow-capped Mount Ararat (5165m) dominating the skyline. Continue to the colossal monument of Cascade and Cafesjian Center for the Arts which includes a world-class sculpture garden and indoor modern art museum with works from Botero, Chihuly, Barry Flanegan and many others.

Exploring the Republic Square, the trendy Abovyan Street, one of the oldest streets in Yerevan which used to be a part of the Great Silk Road, we walk down the colorful pedestrian Northern Avenue and arrive at the Freedom Square, the home of the Opera and Ballet Theatre (architect A. Tamanian). The design and layout of the building was awarded with Grand Prix in 1936 World Exhibition in Paris. A cultural showcase not to be missed is Matenadaran, one of the world’s largest and oldest treasuries of ancient manuscripts. Marvel at the illuminated pages of some of those manuscripts within their glass cases.

Immerse yourself in the history of ARARAT legendary brandy on a guided tour of the museum, which is also the distillery’s operating aging workshop. At the end of the excursion, you will take part in the brandy tasting of 10-year-old ARARAT “Akhtamar”, 20-year-old ARARAT “Nairi” and collection ARARAT “Dvin”.

Today is a long but fascinating day! It is dedicated to exploration of Southern Armenia combining the magic of Armenia’s finest medieval architecture with stunning landscapes.  Our first stop is at Khor Virap Monastery, a 4th century castle-like fairy-tale monastery, the most iconic site in Armenia and one of the most important Christian sites in the world. Its location, near the closest point to biblical Mount Ararat within Armenian borders, offers a spectacular view of the snow-capped mountain, the national symbol of Armenia.
We continue to the south driving through the agricultural heartland of Armenia, Ararat Plain offering an amazing panorama of endlessly stretching apricot orchards and vineyards guarded by the remote majesty of the mysterious twin peaks of Mount Ararat.
We continue driving to the south marveling at the untamed beauty of Southern Armenia – surreal red rocks providing an eerie echo, honey-colored villages sandwiched between them. Visit Areni, the village of winemakers and tour the world-class archaeological site, the cave complex Areni-1 to see the oldest winery in the world (6100 years old).
Enjoy a fabulous lunch in a local restaurant with stunning views, where you will taste the cuisine of Vayots Dzor region – local cheese and yogurt, salads prepared with organic and fresh herbs and vegetables growing in Armenia, and chicken barbecue from “tonir” oven is our main dish today followed by a local pastry “gata” as a dessert with tea/coffee.
Later we visit Noravank, the jewel of the crown among all the medieval sites in South Caucasus. The monastery is nestled among giant red rocks and mountains, just above a deep gorge.
We drive to the best local winery to taste their blow-your-socks off Areni (a deep, full-bodied red) wines made according to traditional wine making techniques used in Armenia thousands of years ago, including the fermentation in terracotta vessels, called karas in Armenian.
Afterwards we journey for approx. 3 hours to the attractive town of Goris where we stay the night.
On our way we visit Karahunj known as the “Armenian Stonehenge”, the oldest observatory in the world which is 7500 years old. There are 223 vertically standing stones 84 of which have holes. The ancients were gazing the stars using them as telescopes.
Dinner and overnight in Goris (Mirhav Hotel or similar)
Tour duration: 10/11 hours
Distance: 280 KM
Meal plan (B-/L-/D-)

This morning we explore the quant and charming Goris, a town in orchards where the houses have the same unique architecture with arch-shaped windows and red roofs. See old Old Goris cave town from a viewpoint.
We have a relaxing ride on the “Wings of Tatev” aerial tramway which holds the World Guinness Record as the longest reversable cable-car (5,7km/3.5mi). The ropeway provides a scenic view of the Vorotan River Canyon with skyscraping snow-capped mountains, waterfalls, green forest glades as well as the 9th century castle-monastery of Tatev perched on the edge of a giant cliff. We get off the tram to explore the miraculous monastic complex which boasts having one of the oldest universities in medieval Europe. Marvel at the gorgeous architecture of the elegant churches, exquisitely carved stone-crosses and enjoy the ascetic atmosphere of the site.
Lunch in a beautiful garden where you taste the typical dishes of Syuniq region.
A refreshing visit to Shaki waterfall.
Continue driving to Jermuk, Armenia’s first-class spa town with its hot springs.
Dinner and overnight in Jermuk (Jermuk Hotel & Spa 5* or similar)
Meal plan (B-/L-/D-)
Distance: 175 KM
Duration: 7 hours

After a hearty breakfast we explore Jermuk, a magical town at 2080m inside a natural forest surrounded by alpine meadows. Taste the famous Jermuk mineral water in the drinking-gallery. Visit the stunning Mermaid’s Hair Waterfall. Take a chair-lift to the mountain top for the breathtaking views of the town. If you feel adventurous, you can take a 4×4 to the hot springs outside the town and bathe inside a natural bath-tub with its bubbling waters (optional and highly recommended!).
Lunch on a river bank.
Driving through Vardenyats Mountain Pass famous for its fascinating colorful mountains we tour the Orbelian Caravanserai on the Great Silk Road at the highest point of the pass (2410 m). Here little has changed since the fourteenth century. The Caravanserai offered hospitality to travelers along the highway crossing the Selim mountains.
Visit the Stone Garden – Noratus, the largest field of Armenian exquisite cross-stones in the world.
Marvel at stunning turquoise waters of the Lake Sevan and dramatic snowy mountain scenery after climbing up the peninsula hill where we visit the 9th century Sevanavank Monastery (optional, over 240 steps to get there).
Continue to lush green Dilijan, often called “Armenia’s Switzerland”. Take a stroll in Old Dilijan town with its craftsmen’s workshops and stores.
Overnight in Dilijan (DiliJazz Hotel 4*or similar)
Meal Plan (B-/L-)
Distance: 220km
Duration: 7-8 hours

“If God wishes to visit Armenia one day, I will take him to Dilijan”, Grigor Magistros, a medieval Armenian scholar, prince (990-1058)
After a healthy breakfast we head out to discover the marvels of Dilijan National Park, a protected area renowned for its serene lakes, picturesque hill trails and peaceful villages often called “Armenia’s Switzerland”.
We continue revealing the hidden sites in the forests as we drive to a beautiful lake named Parz, where you can relax or take a peddle-boat, or if you feel adventurous you can try the zipline over the lake!
We also visit the breeding center of the Caucasian red deer. You can feed them!
We drive to the depth of the forest and tour the fairy-tale Haghartsin medieval Monastery tucked away on a hidden remote glade.
Enjoy a real samovar tea, wild raspberry jam, pancakes, home-made cheese and fresh bread with a Molokan family in a small exotic village.
Drive to Yerevan.
Overnight in Yerevan (Paris Hotel 4* or similar)
Meal Plan: (B-/Light L-)
Distance: 160km
Tour duration: 6-7hours

In the afternoon we drive to Garni Fortress, the most beloved summer residence of the Armenian royal dynasties. Travel 2000 years back in time as your guide is showing you around the impressive 1st century Hellenistic Temple (the only one in the former USSR), the royal Roman Baths with a colorful mosaic, the palace ruins.
We visit a local villager’s house for a traditional Armenian meal. Our table is set amid the blooming apricot orchard. Roll your sleeves up and join our hosts who will bake the traditional Armenian bread “lavash” in “tonir” oven. Freshly baked lavash has to be the most delicious bread on earth!
After a hearty lunch continue to Geghard (UNESCO site), a surreal monastery carved inside a huge rock in a magical setting surrounded by incredible rock formations. Your guide will reveal all the secrets and stories behind the marvelous site.
The highlight of your trip will be a walk in the Azat River Gorge to marvel at one of the most beautiful geological wonders of our planet called “Symphony of Stones” – giant hexagonal basalt columns stretching along the river for several kilometers. Your guide will show you how to take the most creative photos of the place.
Overnight in Yerevan (Paris Hotel 4* or similar)
Meal Plan (B-/L-)
Distance: 90km
Duration: 6 hours

Your pleasant and memorable Armenia tour ends today. Fly home with cherished memories or enjoy your extended stay in Armenia. 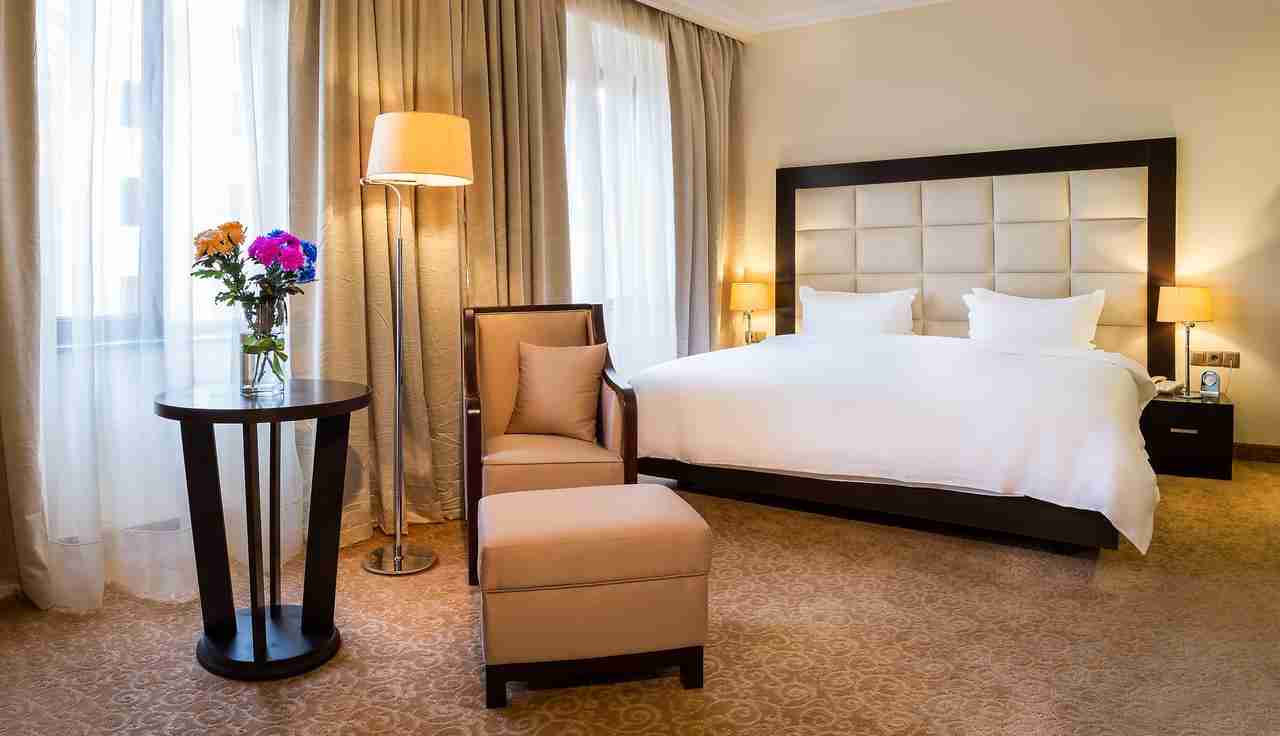 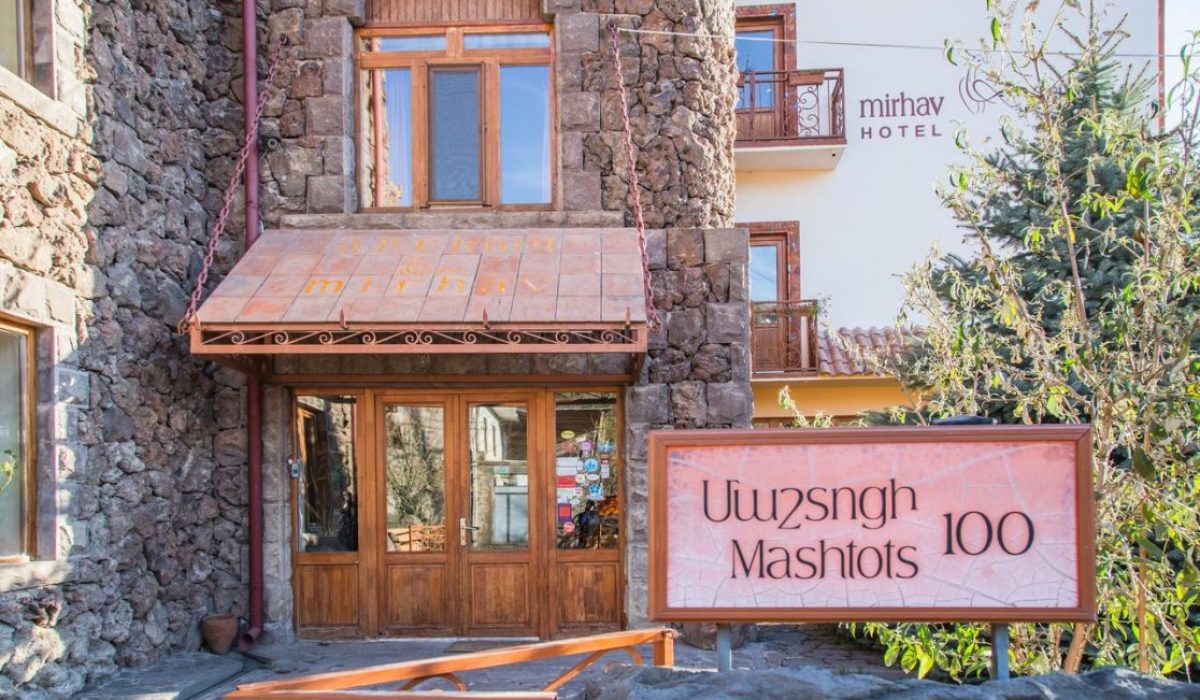 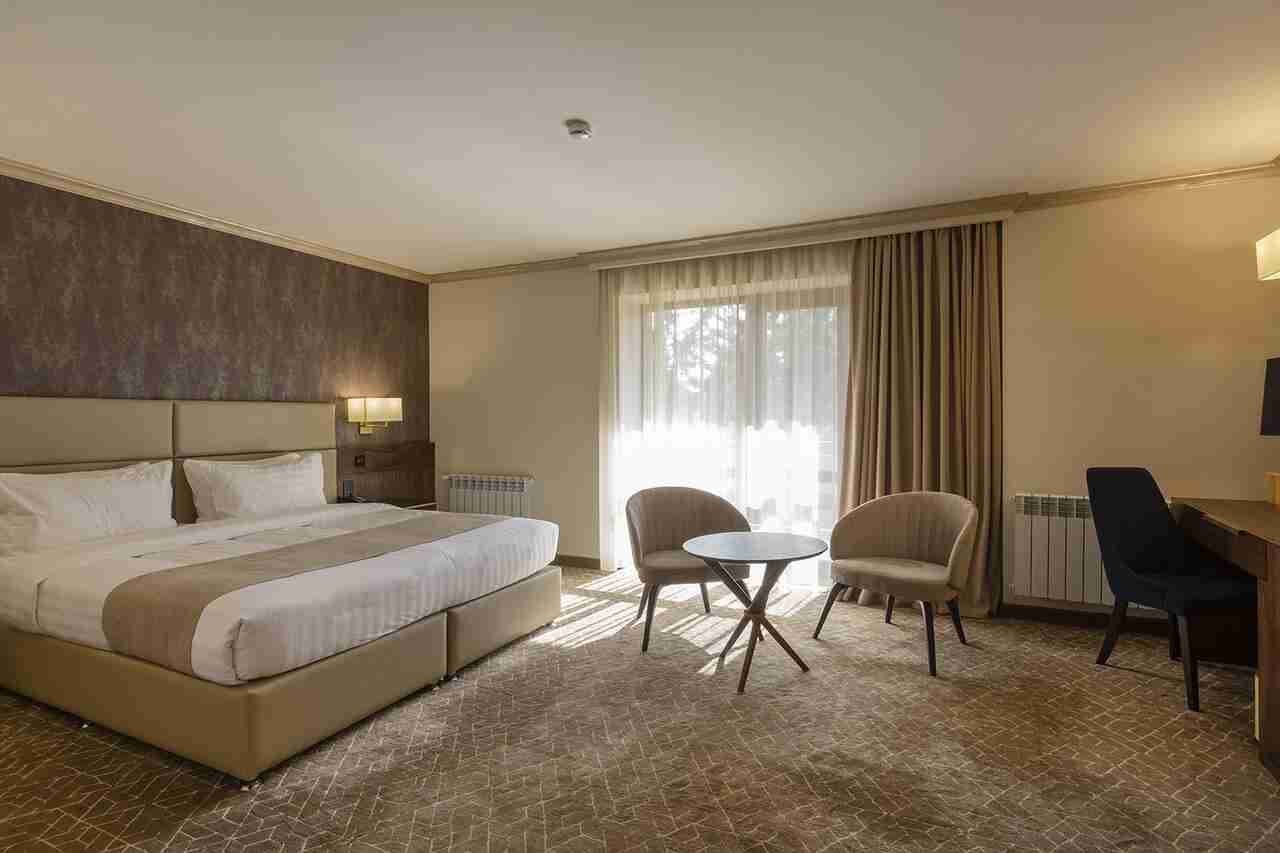 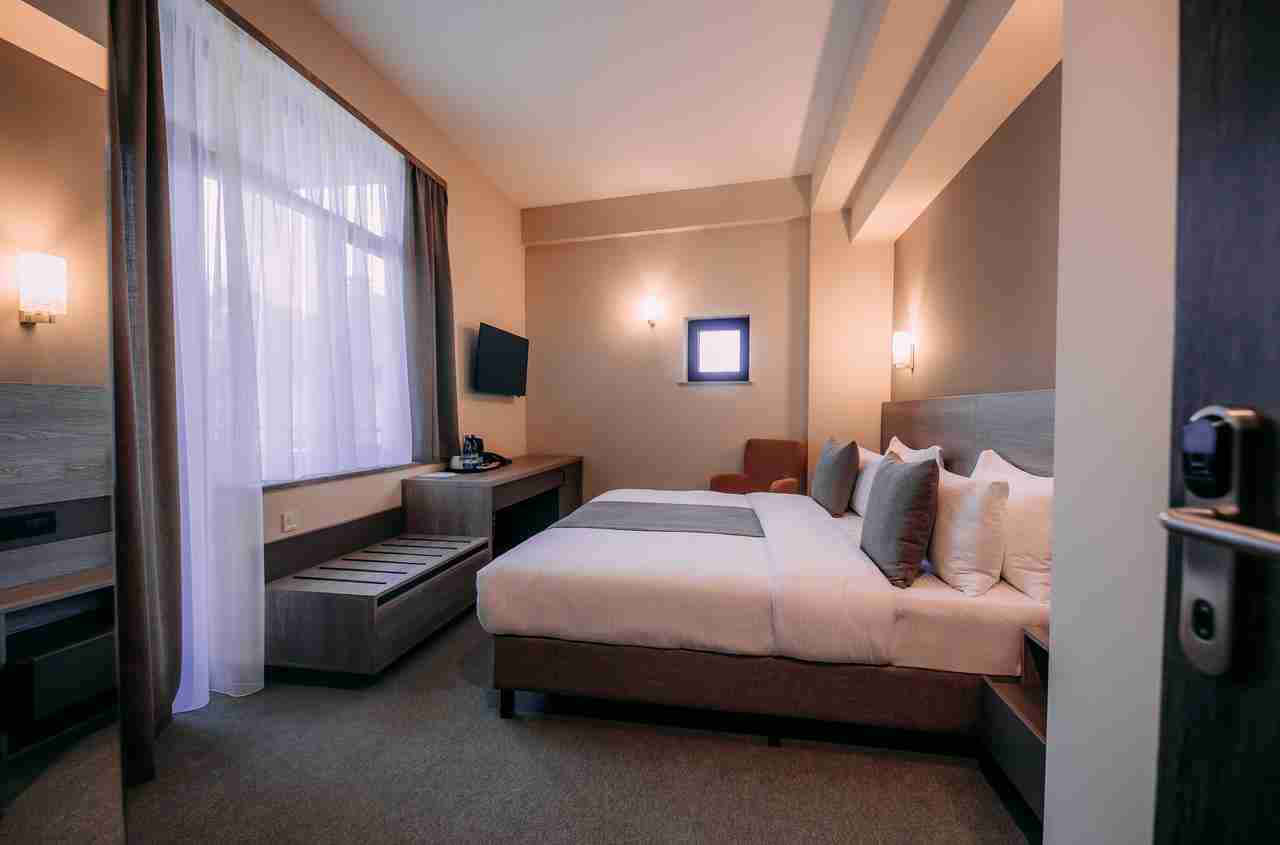