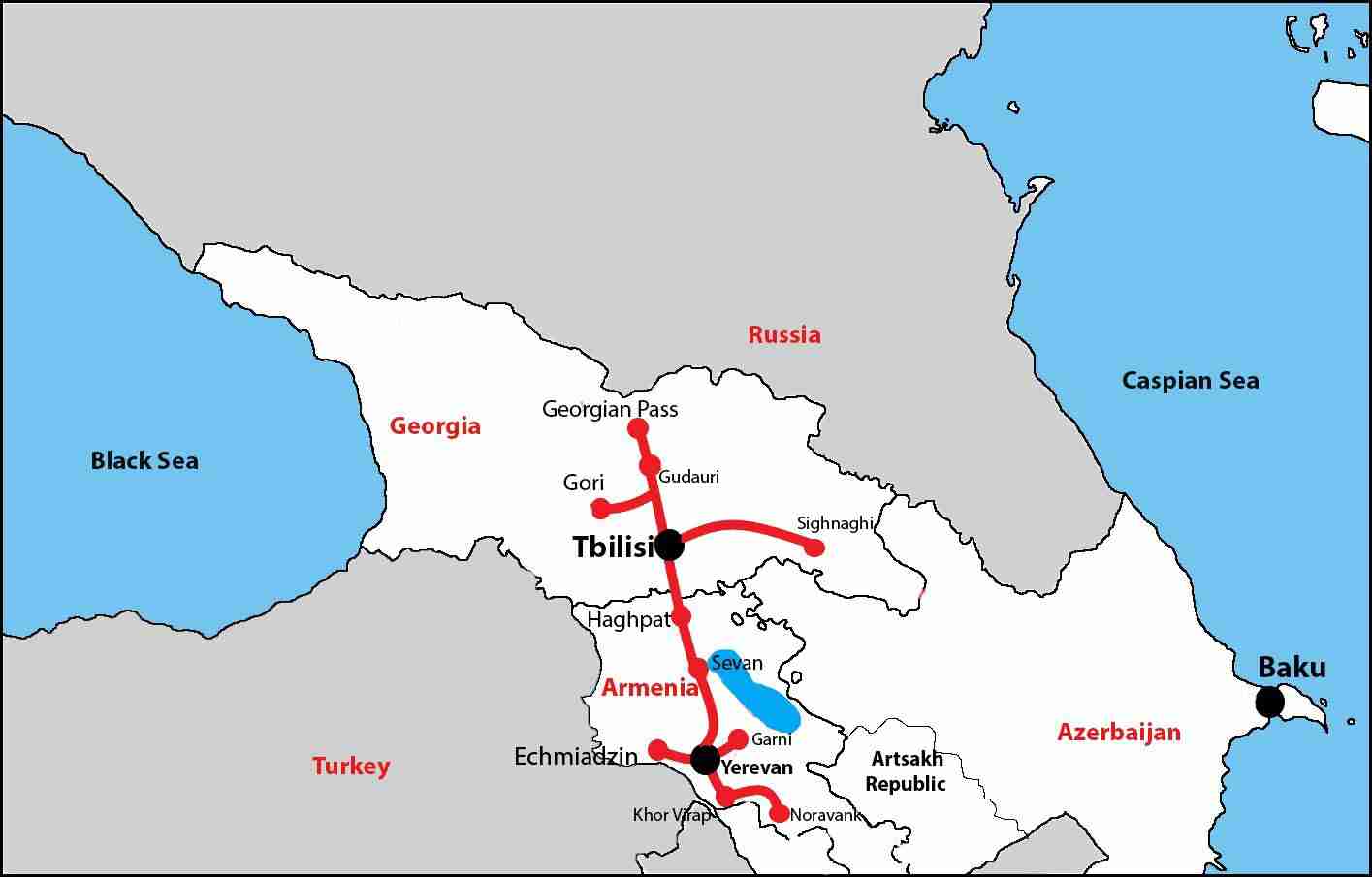 Arrival at Zvartnots International Airport in Yerevan. Transfer to the hotel.

Yerevan is the pink “pearl” of Armenia. This beautiful European city is mostly built by different shades of pink stone called “tuf” quarried in Armenia. Founded in 782 B.C. Yerevan is reputedly one of the oldest cities in the world to have been continuously inhabited. The city is located under the gaze of the biblical Mount Ararat where the Noah’s ark landed. We start our exploration with the Republic Square with it magnificent buildings enhanced by singing fountains. Walking down the Abovyan Street, one of the oldest streets in Yerevan which was on the Silk Road,we continue to Northern Avenue, Opera House, Cascade, Grand Bazaar. A cultural showcase not to be missed is Matenadaran, one of the world’s largest and oldest repositories of Armenian manuscripts. Later we’ll visit the most impressive museum of Armenia – Sergey Parajanov house museum, one of the greatest figures of 20th-century world cinema.

Leaving the frantic pace of the city we are heading towards Garni Pagan Temple, the only Hellenistic Temple in the Caucasus. The Pagan Temple of Garni is the only pagan temple currently standing in Armenia. Gracing the hillside the pagan temple was dedicated to the God of Sun, Mithra. It was built in 77A.D. Proceed to Geghard Monastery (UNESCO) carved out of a huge monolithic rock. Geghard is an incredible ancient Armenian monastery, partly carved out of a mountain. It is said that the Holy Lance that pierced the body of Christ was kept here. The architectural forms and the decoration of Geghard’s rock premises show that Armenian builders could not only create superb works of architecture out of stone, but also hew them in solid rock. Back to Garni village. Visiting a local house in Garni village. Traditional Armenian bread-Lavash making in tonir (underground earth-stove).

Early morning departure from Yerevan. The first stop of our trip is Khor Virap, the most sacred pilgrimage destination in Armenia. Guided by the remote majesty of biblical mount Ararat, we explore the site, its underground chambers, elegant chapels and are captivated by the ascetic atmosphere of the site. We continue to the south driving through the agricultural heart of Armenia, Ararat Plain offering a fantastic scenery of fruit orchards, endless vineyards at the foothills of Ararat Mountain where the Noah’s ark landed. As soon as the we pass the Ararat Plain we can experience the untamed beauty of Southern Armenia – surreal red rocks providing an eerie echo, honey-colored villages sandwiched between them. Our next stop is the Monastery of Noravank, an architectural gemstone nestled among brick-red cliffs, just above a deep gorge. Later we’ll drive back to Areni village, the cradle of viticulture! This is where world’s ancient winery was found (about 6000 years old). Winery tour and wine tasting.

We tour around the Lake Sevan (60 km far from Yerevan), a huge mountainous lake which takes up almost 5% of the country’s surface area. It’s one of the most beautiful alpine lakes in the world situated at 1900 m above sea level . On a clear and sunny day, the water is often deep turquoise color. Then we continue to Dilijan National Park. Many poets used to say, “If there are woods, mountains, streams and mineral waters in paradise, it must be like Dilijan”. As a climatic balneal health center of medium-mountain zone, Dilijan is characterized by mild, moderate warm summer, sunny warm winter and dry warm weather during the whole year. Take a stroll in the most beautiful part of the town, Old Dilijan Complex. Here we experience the town as it was in the 19th century. We visit Haghartsin, a fairy-tale monastery nestled in the middle of the forest. Drive to Dilijan

Driving through the Russian Old believers’ villages and picturesque Canyon of Debed River we visit the Monastery of Haghpat dating back to the 10th century. It’s a perfect example of medieval Armenian architecture. Being astonishingly well preserved with its frescoes, “lace” stone-crosses, inscriptions and bas-relieves it became the first Armenian architectural monument to be included in the list of UNESCO World Heritage Sites. Drive to Sadakhlo Georgian – Armenian border. Change buses and guides. Continue to Tbilisi.

City Tour in Tbilisi. Tbilisi today is one of the most modern and cosmopolitan cities in the Caucasus. Since that time the city has been destroyed and rebuilt on nearly 30 different occasions following a long history of fighting off Persian, Arab, Turkmen, Mongol, Turk and, finally, Russian invaders. We begin our tour with a visit to Old Tbilisi town with its “Sulfur Baths” district, Georgian Orthodox and Armenian Gregorian churches, and a Jewish synagogue and a Turkish mosque side by side, reflecting Tbilisi’s acceptance and tolerance of different religions. Then we’ll continue our sightseeing with a visit to the Fortress of Narikala and its St. Nikolas Church. We can walk up the stairs of the fortress in order to get a “bird-eye” view of the magical city of Tbilisi. We’ll stroll down Rustaveli Avenue, the main thoroughfare running east through the city.

Today we will drive north along the Georgian Military Highway, linking Georgia with Russia into the mountainous provinces of the Greater Caucasus. The first stop of our tour will be in sacred Mtskheta (UNESCO World Heritage Site), the ancient capital of eastern Georgia, at the southern end of the highway. Georgia conversion to Christianity took place in Mtskheta in 337 AD. We will visit Church of Jvari perched on a cliff overlooking the city, the Sveti-Tskhoveli Cathedral, the first Christian church to be built in Georgia and its largest functioning cathedral and the Samtavro Monastery complex. Continuing our journey into the mountains, we will stop in Ananuri to see the incredible 16th century fortress complex built by the warring dukes of Aragvi in an attempt to control the main road. Later a tour to Gergeti Trinity church at Mount Kazbek.

We journey down from the mountains today stopping  at Samtavisi Georgian Orthodox cathedral (11th century). The Assyrian missionary Isidore founded the first monastery here in 572 A.D. We continue to the town of Gori, founded by one of the greatest kings of Georgia, David the Builder in the 12th century.  Visit the house museum of Joseph Stalin in Gori as this town is the house birthplace of the dictator. The town will also provide a convenient jumping off point for our explorations of nearby Uplis-Tsikhe, an ancient cave town dating from the first half of the 1st millennium BC. The entire town is a complex of rock-cut streets, residences, churches, secret tunnels, water passages, markets and the oldest theatre in Georgia.  Though there are about 700 caves the visitor have access to only 150 of them. Drive to Tbilisi.

Today we visit  Sighnaghi – “the love town” in the wine region of Kakheti. It is located on the eastern part of Georgia, bordered by the small mountains province of Tusheti and mountain-range of Greater Caucasus to the north. Here we’ll visit Bodbe monastery of St. Nino. Her tomb is still shown at the Bodbe Monastery. St. Nino has become one of the most venerated saints of the Georgian Orthodox Church and her attribute, a Grapevine cross, is a symbol of Georgian Christianity. Drive to Tbilisi.